Imagine getting off a boat and walking into a land that not only looks different from your homeland, but the language isn’t even close to your own. How do you answer the questions from the immigration officials? How do you let them know who is sponsoring you and where you are going? How do you tell them your name, your city of origin, your family?

For many Syrian immigrants who came into the United States this was the problem they faced. It was a frustrating process for all, until interpreters and inspectors like Najib Arbeely, were hired  in New York City to translate for the new arrivals from the Middle East, in particular from the Greater Syria area.

His own family came to the United States, in 1878 due to the persecution of Christians by the Ottoman Empire. His father was a doctor and Najib was 16 when the family settled in Tennessee, where Najib received a degree and became a professor of French at the college after graduation.

“Because of his love of learning and progress he left the homelands and departed from family and friends and rode the seas casting caution to the wind, and arrived in these lands with his family and children and thus attained the desires of his heart and his purpose [search for knowledge.

Retrieved on September 15, 2018 from https://lebanesestudies.news.chass.ncsu.edu/2016/11/30/arbeely-family-pioneers-to-america-and-founders-of-the-first-arabic-language-newspaper/

In 1885 Najib was appointed by Grover Cleveland as special counsel to Jerusalem. Due to political maneuvering he never actually served as consulate. 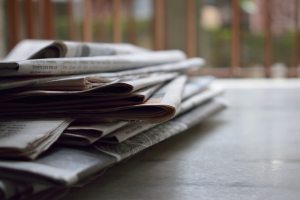 In 1893, Najib, along with his brother Ibrahim, founded the Arab American newspaper in New York, Kawhab Amrika (Star of America) Papers were essential to both immigrants settled in the US and to those who were about to immigrate. It provided information on what was needed to get through immigration in New York, the most difficult port of entry to enter for many Arabs. It also helped families keep in contact and find out news from Syria.

The Moise A. Khayrallah Center for Lebanese Diaspora Studies

Arbeely Family: Pioneers to America and Founders of the first Arabic language newspaper by Akram Khater